In the Annual Meeting minutes printed in the November 29, 1974, of the Vancouver Island section of the Alpine Club of Canada it was written: “A suggestion was made by Gil Parker [section Chairman] that the Climbing Committee set up a list of graduating climbs on the Island and that these be recommended to the Main Club.”It wasn’t until Volume 5:1 (January 1977) of The Island Bushwhacker that there was any mention of graduating peaks.

The list of the nine peaks chosen, and in order of difficulty there were:

It was noted that the nine island peaks listed were all above the timberline (3500 feet to 4500 feet) and all had glaciers and snowfields of varying sizes, all are climbed by their easier routes while most of the more difficult ridges and faces were unclimbed at time of writing.

In The Island Bushwhacker  May-June 1980, Volume 8:3, the section defined Senior membership and how the nine “Major Island Peaks” were selected:

As many section members are interested in joining the main club as Associate and Senior members, the following is a list of peaks on Vancouver Island which are considered to meet the ”alpine character” described in the Club standards. Senior membership is open to anyone with at least two seasons of alpine climbing experience that has included the ascent of four ”alpine” mountains. Three Senior members need to sign the application as well. The Senior memberships involve these steps since it is assumed that a Senior member will likely want to participate in the Club’s special Alpine Climbing Camps or particular expeditions.

These opportunities are separate from the General Mountaineering Camps which are open to all members, and because Alpine camps are far more demanding of all-round skills, some general standards are considered necessary for the Senior applications to be approved. This doesn’t guarantee that all Seniors admitted on these camps will be thoroughly experienced climbers, but it does ensure that the participants will have a minimum level of mountain skills, and that they will be able to independently organize a particular climb.

What makes a peak ”alpine in character”? The Club used to include a minimum altitude of 10,000 feet (3048m) in the definition, but this has been dropped in recognition of the fact that many peaks of the west coast are complicated or difficult ascents yet far below 10,000 feet. The elements that make a peak alpine, for the purposes of applications in the Club, will include:

You don’t have to have been the leader of the particular climb, although it would be an indication of organizational ability! How is that leadership defined?

The leader of the climb usually leads the most difficult pitches, and chooses the route on glaciers or over other unmarked terrain. The leader may not always be at the front of the party, and the group normally has input into the route finding decisions, but the leader is acknowledged as having the best judgment of familiarity with the area, and has the final say in any matters of safety. If this role sounds familiar for the climb you just did, you can certainly consider that you led it.

These Island peaks are listed in order of decreasing difficulty. All have glaciers and snowfields of varying size, and the easier routes are considered adequate as ”ascents”. For many, the harder routes are yet to be climbed. 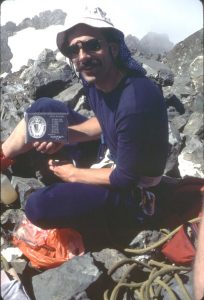 The first person to achieve the “Island Qualifiers Award” was Rick Eppler when he climbed Harmston on October 11, 1986. This achievement was noted in The Island Bushwhacker Fall 1987 Volume 15:4. Rick’s quest started when he joined the club in June 1975 and Rob Macdonald had the honour of presenting Rick with his plaque while on the summit of the Golden Hinde the next year. Although Rob had to carry the plaque in, it was up to Rick to carry it out! Included on that trip were Don Berryman and Wendy Richardson. Both Don and Rob completed their IQs that same year while Wendy completed hers in 1988. It should be noted that at this time in Strathcona Provincial Park’s history, parties were able to take advantage of flying into Burman Lake to climb the Golden Hinde, whereas today everyone has to hike into the mountain from the mine at Buttle Lake or up the Elk River trail.

Today the Senior membership is no longer acknowledged as a prerequisite to attend alpine camps or expeditions. However, the Vancouver Island Section has kept with the list of the nine peaks and called them the Island Qualifiers. The Section now offers a small plaque to members who have climbed all the peaks on the list.. Since 2014 the award is named the “Rick Eppler Island Qualifiers Award” in honour of Rick Eppler, who was not only the first to complete the IQs but has many first ascents on the island.

The ACCVI Section Members who have achieved this distinction are: