This is a very brief and very incomplete history of ACCVI huts on the Island. Over the years there have been many times when a hut has been considered, some proposals have even been started but as far as I know there has not been a hut on the Island since the 1930’s The hut located at Seven Hills Lake (now called Sheilds Lake) is shown in this photograph. This article from the Canadian Alpine Journal, 1932 provides some information about the hut, interestingly although the kitchen and other cooking facilities are described in detail there is no mention of toilets. 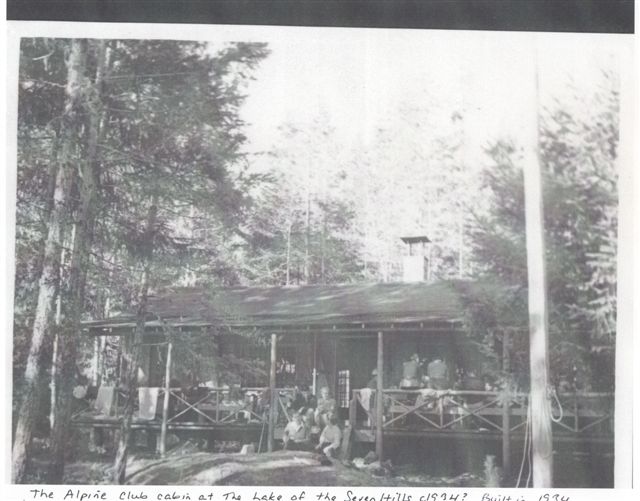 In late 1974 it appeared that funds might be available to build a hut [BushWhacker February 1975]. Unfortunately the funds did not materialize but the 1975 Executive went ahead with planning for a hut at Cream Lake in Strathcona Park. The club received support from many island mountain clubs but ran into bureaucratic issues with BC Parks who started a review of all mountain huts in Provincial Park [BushWhacker March 1976].  There was also a proposal in 1980 for a hut at Mt Washington but it was not favourably viewed by the Finance Committee, apparently it was considered to be too expensive [BushWhacker Summer 1980]. At the end of 1981 there was talk of proposing a hut for the Buttle Lake area in Strathcona Park but that was never realised [BushWhacker Nov/Dec 1981].

More recently, in 2012, BC Parks approached the club about taking over and managing the ranger cabin on Forbidden Plateau [Bushwhacker Annual 2012, p.2]. Unfortunately there was a significant amount of bureaucracy for little gain and the project did not proceed.

Finally at the 2015 AGM Chris Jensen presented a proposal for a hut on Vancouver Island. He quickly recruited a few unsuspecting individuals to form a Hut Committee to investigate further. The Hut Committee decided that a hut was feasible and, after consulting the First Nations in the area and local outdoor groups, suggested the West Ridge of 5040 Peak as the best location.
Factors weighed for the decision included:

The west ridge on 5040 Peak overlooks the pristine waters of Cobalt Lake and has picturesque views of Triple Peak and The Cats Ears.

The hut site is 35km west of Port Alberni, located at 1,319m elevation. This scenic alpine area provides wonderful summer hiking and fantastic back country skiing terrain. The hut will be accessible year-round to users and groups to hike, ski and snowshoe in the alpine.

From the trailhead on Marion Main Forest Service Road, most hikers will reach the hut in 2 to 4 hours.